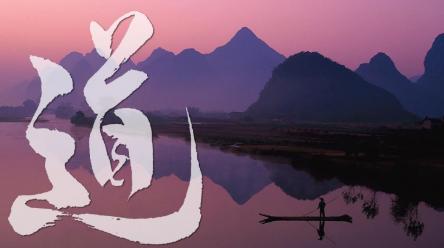 What is imperfect will become perfect.

What is crooked will become straight.

What is empty will become full.

What is worn out will become new.

With little, ‘It' is gained.

With much, one deviates from ‘It'.

That is why the sage holds fast to the One,

and in this way makes himself into an example for the world.

Not seeking to shine, he is enlightened.

Not overrating himself, he is distinguished.

Not boasting, he has merit.

Not wanting to be first, he is superior.

Standing in non-conflict, he is unconquerable.

When the ancients said,

‘What is imperfect will become perfect',

how could this have been an empty phrase?

When someone has attained perfection,

everything must yield to him.

The individual chapters of the Tao Te Ching can best be understood when seen in the context of the book as a whole. So we would like to look at chapter 22 in the light of what was said in some of the preceding verses.

These showed that, right in centre of every microcosm, at a point coinciding with the heart sanctuary of the material human being, dwells `the essence of the Spirit'. This centre, this rose of the heart, gives life to true creation, to the rebirth of spirit, soul and body. Whenever a human being finds ‘the way’, recognises ‘the truth' and lives ‘the life’, such a victory is inevitable. That is why, in chapter 22, Lao Tzu can state as an axiom that:

It is absolutely certain that the divine plan for the world and humankind will be successful, and this is what Lao Tzu is making clear to his pupils. The concise language of the Tao Te Ching, with its briefly formulated lessons in which every- thing is said using the minimum of words, is clearly not aimed at the average person, but at Lao Tzu's pupils and fellow workers, the emissaries of the Universal Chain and their helpers. Such workers have an arduous labour to perform, in the course of which they are quite likely to lose courage, and even, at times, to be overcome by sorrow.

This psychological state is also described in the gospels and may overtake any worker in the vineyard from time to time. It is to such people that the teacher's words are addressed:

These words give every worker new courage to persevere and keep going, whatever the circumstances, for every child of God will, and indeed must, reach the ultimate goal. The path to perfection will be found by everyone, and everyone will `make straight the paths'; the empty will be filled by every- one, and the result will be victory: what was worn out, will be renewed.

All who have approached the Spiritual School and have accepted pupilship have obviously become potential fellow labourers in the great work. This work is totally devoted to the imperfect, the crooked, the empty and the worn out, so as to make it whole and be of service to it.

1 the way of perfection,
2 making straight the paths,
3 filling what is empty,
4 the renewing process of transfiguration.

If you want to unlock these four possibilities (which, ultimately, are certainties), you will need to approach them in this order, because that is the order in which they unfold.

When you first read verse one of chapter 22 you may have thought that it was meant to be encouraging only in a kind of mystical way, in the sense of: ‘Just persevere, just keep going, and everything will turn out fine,' in which case it would not be so important what was said, or how it was said, for it would simply be an expression of loving concern: `Don't worry. The crooked will be made straight in the end.’

But no, there is more to it than that. The nature of these words, the order in which they are expressed, and hence their structure, is in keeping with a law of the divine nature which governs the way in which creation and creatures are manifested. This is what we know as far as God's creature, the human being, is concerned:

After a period of preparation, called involution, the human being is faced with a task, called evolution. Contrary to what many people think, evolution is not an automatic process. Evolution does not just happen by itself; the human being needs to enable it to happen, through his own efforts. He needs to magnify the divine aim, in himself, and by himself, voluntarily, and in understanding and love.

The plan that is then unveiled, must be put into practice. It must be fulfilled by the individual himself, in free will and devotion, with an all-consuming interest and profound love.

The presence of the spiritual essence in the centre of every human system means that everyone is capable of attaining the goal. But whenever any individual does not do so, or does not want to, the laws of the counternature will immediately come into effect. These laws are always self-correcting. If necessary, the whole nature of death will function in this way, in order to keep on bringing the entity concerned back to the sublime reason innate in his divine spark.

So the way of perfection is, and has always been, present in the centre of your being. Its sublime rationale is eternal and always remains the same. But what if, undergoing the results of deviation from the divine plan, you have gone so far astray that you have ‘forgotten’ it? What if you are structurally denatured to such an extent that, when you are confronted with the path of perfection, you can no longer understand it and at best perceive it in a very obscure way? Then what you need most is to be shown the path of perfection time and time again, and to have all its aspects illuminated for you one after the other.

When the personality, born of the counternature and bound to it, has been buffetted so much by it that his lower nature is quite exhausted, he may at last hear the fervent cry coming from the primordial atom in the heart. Then the dark cloud that lies between the sublime reason of Tao `which is in the midst' and the defeated heart of the personality, can be swept away and the seeking person will once again see face to face the way of perfection.

One of the propositions from Spinoza's Ethics states that ‘A person who is motivated by fear and thus does good out of fear of evil is not guided by reason. However, a person who is touched by the reason that exists at the heart of things will never experience anything else than feelings of joy and intense yearning.’

Imagine how it would be if you had been so crushed and shocked by life that you had fled into the School of the Rosycross out of fear of even worse suffering, and that you had become a pupil because you were in the grip of this intense fear. Then, when you were told about gnostic philosophy, such a motive would not enable you to catch even a single, momentary glimpse of the way of perfection lying before you. It might even be so that the sublime reason present in the centre of your being had never spoken to you at all. Then the rose of the heart would still be completely enclosed in its bud. Gnostic philosophy would carry no meaning for you; it would have no power in you.

A School like ours is not in any way like a religion of this nature because, as Spinoza says: ‘Those who strive to keep human beings under control through fear’ - he means fear of an avenging justice - ‘thus driving them to flee evil rather than loving virtue, aim at nothing else than making others’ lives as disastrous as their own.’

That is why it is important for anyone who has come to the end of his path in the nature of death, who has really landed on the bottom of the pit of death and has seen his whole life deteriorating through worry, fear and dread, through conflict and self-maintenance, to consider from time to time whether he is still acting out of an urge to seek new objects or subjects of fear, worry and dread, and to keep on vivifying new reasons to carry on some conflict or other.

If that is so, then the end of his passage through the land of despair has not yet come. The nadir of his suffering has not yet been reached.

However, when the psychological end really has come, a silence, a state of resignation will arises. Then, through your suffering, you will hear the voice of the rose, the voice of the sublime reason which exists in the centre of your being. Then there will be no further flight, but only joy and yearning: the person who is touched by reason, will never experience anything else than feelings of joy and intense yearning.

Why joy? Because, for the first time, the way of perfection is opening up for him in all its beauty and radiance. Why an intense yearning? Because, after nameless suffering and affliction, after being wounded in every fibre of his being, the individual sees the wisdom and fullness of the liberating life shining so clearly, and offering such vast perspectives, that a boundless yearning to attain it seems to make his heart leap with excitement.
Thus, in joy and yearning, the foundation for genuine pupilship is laid. Then it is no longer difficult to decide whether or not to accept the consequences of a new approach to life. And, filled with almost boundless energy and power, one will gladly make a start on the second aspect of the fourfold process: making straight the paths.